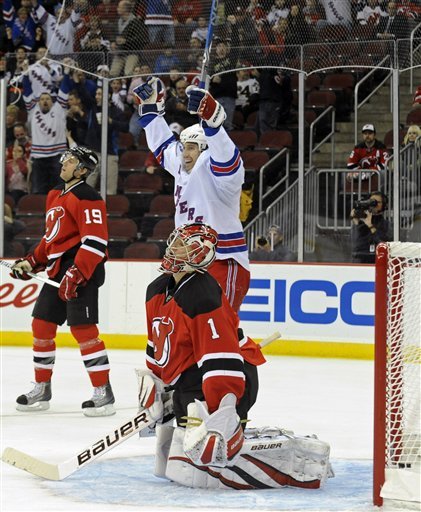 The Devils fail to win 2 straight and fail to win at home yet again. Despite outshooting the Rangers 33-20 and having the ice appear to tilt towards Henrik Lundqvist a few times, the Devils couldn’t find a way to win this game. In fact the Devils were shutout for the 2nd time in 3 games and continue to struggle finding the net, a common storyline for this season. In my opinion, the Devils have never had a guy that you could depend on when it came to scoring goals. Sure, we’ve had goal scorers and Parise is probably the closest thing we’ve had to what I am talking about but never the type of scorer that whenever he was on the ice, you wondered if the puck was going in the net on that shift. I thought signing Ilya Kovalchuk would be that guy for us. So far, he hasn’t been and it is comepletely frustrating.

Someone needs to step up for NJ and carry this team offensively. Like I said, at times tonight, the ice looked as if it were tilted towards Lundqvist but the Devils just couldn’t get one home. The Devils started the third period in a very bad way as Kovalchuk took a very undisciplined penalty and then Clarkson got called for boarding as he sent Boyle head first into the boards.

Give the Rangers credit tonight. They are a very good shot blocking team and don’t seem to be afraid to throw the body in front of a shot. They also did a great job swarming Kovalchuk everytime he got the puck. I said it in my preview that Dubinsky was the guy to watch tonight and he made the Devils pay twice.

A few observations from tonight’s game

– I liked what Gionta brought to the rink tonight. I’m very interested in seeing what he can bring to this team if he stays in NJ for a bit.
– Tallinder is still not winning me over. I don’t remember him playing this poorly in Buffalo.
– For the most part, Langenbrunner, Zajac and Kovalchuk are just giving the Devils nothing offensively.
– Passing game…Not so good.
– I didn’t think Hedberg did too poorly. The only questionable goal he gave up was the 3rd of the game, the shorthanded on to Dubinsky.
– Shooters looked frustrated after every shot that leads to a stoppage.

NJ will have a few days to work on some things as they don’t play again until Wednesday when the Sabres come to town. A 4 day break is very welcomed at this point.

NFL stock report: Who is rising, falling after Week 3?The Sports Daily