The Rangers return to the Prudential Center for the first time since the words “THEY SCORE!!!…Henrique…IT’S OVER!!!!” was so gloriously shouted by Mike “Doc” Emrick. 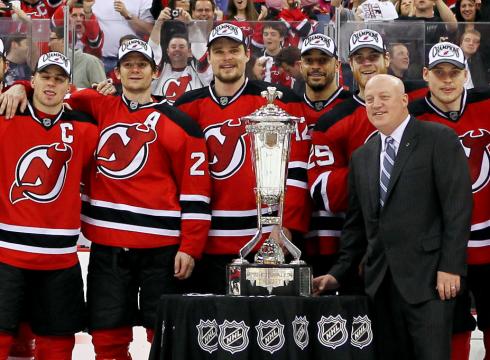 The Devils Last Game – Give them credit for what they did on Sunday afternoon in Long Island. Coming off a game against the Islanders that was very back and forth, followed up by a shellacking by the Penguins, I wasn’t sure where this team stood. Shortened season = compressed schedule = no time to practice and fix things had me worried about Sunday. They did an excellent fighting through a scoreless 55+ minutes.

The Last Rangers Game – There were a lot of questions going into their matchup with the Lightning but I thought the Rangers did a great job against a fast and high powered team like the Lightning.

The Last Rangers/Devils Game – This is all you need to know and I’ll take ANY excuse to post it again.


Tonight’s Game – No matter where it is in the season, what place the teams are in or anything else really, a Devils and Rangers game ALWAYS gets me hopped up.

The game plan for tonight should be very similar to the game we had for Sunday’s matchup with the Islanders.

This is the first time that we get to see the Rangers line of Nash/Gaborik/Richards that everyone has been talking about.  We will certainly have to have one of our best defensive efforts because that line is incredibly expensive talented but we can’t overlook the Rangers second line (much like the Islanders top two lines).

The Rangers defense is a little more talented than the Islanders D but it is extremely important to put shots on net. Surprisingly the Rangers averaging 30.5 shots against per 60 minutes which, for a team so committed to shot blocking a season ago seems VERY high. This would suggest the Devils will get a decent amount of pucks to the net.

When the Devils get the man advantage, it would be best to fire as many pucks on net as possible. The PK seems to be Lundqvist’s weak spot this season. He has a 92.3% save percentage at even strength but a disappointing 82.1% save percentage on the PK. Same can be said about Marty (91.1% and 84.6% in the same categories) so our PK will need to step up just as much as theirs.

Win or lose, tonight will be a good indication of how our team is doing. The Devils are in a tough run right now, playing lots of tough teams. If the Devils win, it keeps the Rangers down in the standings for a bit longer and a sign that this team can compete with teams that have quite a bit of talent, something we all questioned Saturday night. A lose, well if that happens, I am sure we will all have questions that need to be answered.

Follow us on Twitter during the game and come back after the game as we recap the action and hopefully the win!!

MLB hot seat rankings: Which managers are most likely to be fired?The Outside Corner