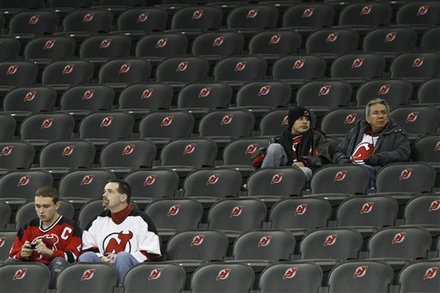 Yes, there was a snow storm but really, are the Devils worth the price of admission?I decided that in the best interest of following the Devils, that I would step away from this team for a few days. Who am I kidding, it was Christmas and I’ve been a bit busy wrapping gifts, unwrapping gifts, hanging a new TV and playing with toys and Wii games that I didn’t have time to jump on this blog and write about the Devils. BUT, that time has ended so here we go, strap in!!

* Thoughts on the John Maclean / Jacques Lemaire  situation: The Devils gave John Maclean the pink slip on Thursday, making it the worst thing to happen to a John Maclean at Christmas since Hans Gruber ruined the  Nakatomi Corporation Christmas Party in 1988. I’ll admit, I wasn’t surprised NJ let MacLean go but extremely shocked Lemaire is back, again. Oh wait, no I am not..it’s just what we do. We take back players and coaches that have repeatedly quit on this team and give them another chance.

The only thing obvious about Lemaire taking a spot behind the bench is that the Devils will once again be looking for a coach this summer. I can’t see Lemaire staying after this season.

* Lemaire’s First Two Games: Granted he had about an hour to prepare for the game against the Islanders but the Devils didn’t even find any kind of spark with the coaching change. They were flat, they made a ton of mistakes and the Islanders handed it to the Devils in a very bad way. In fact, this game bugs me more now that I watched the Rangers completely destroy the Islanders last night.

The game against the Leafs wasn’t any better. In fact, once that game was done, I realized there is no making excuses for the Devils, they are just a BAD hockey team. In one years time they’ve gone from first to worst. Believe it or not, this time last year, the Devils owned the best record in the NHL, now they own the worst. Their passing is awful but they are able to put shots on net, its just that their shot selection is about as bad as their passing. There isn’t a guy on the team that I wouldn’t trade right this minute.

* Time For Lou To Go: He can go upstairs and remain President of this team but as far as his GM duties, he needs to give those up. I don’t think he was ever for signing Kovalchuk, I think that came from the owner so I am not saying step aside for that. It’s the other things, like the constant retreads we get in NJ. It has happened over and over. Mogilny, Rolston, Arnott, the list goes on and on. To be honest, I am shocked that Bill Guerin wasn’t offered a contract with NJ before retiring. On top of the retreads and overpaying those retreads, his ability to find the right players is gone. He used to have that ability. Think back to 2003 when he traded Petr Sykora for Jeff Friesen and Friesen had an incredible Spring, helping NJ to win the cup. Or when he originally brought in Mogilny who helped NJ to a cup in 2000 and back to the Finals in 2001. Now, we sign guys like Zubrus, Tallinder and Volchenkov who do nothing but fill a roster spot and collect a paycheck because lets be honest, that’s all they are doing.

* Marty Brodeur: Truth, your goalie is only as good as the guys in front of him but Marty looks old this year. He lets in too many goals on too few shots and does so while he has a good look at the puck. If goals where being scored through screens, I’d say OK, the D need to clear the lane a little better but that’s not the case. Marty, please retire…I beg you. You’ve done so much for this team but we don’t want to see you play like this.

* Brian Rolston: Assigned to Albany this morning… Good, oh wait, he’s over 35 and we are still on the hook for his salary. What’s that?? Lou plans on putting him on re-entry waivers later this week hoping someone takes his old, decrepit ass off our hands?? Fat chance that happens. See my Lou rant above.

The Devils better figure out whats wrong and do so in a hurry or someone might be throwing around the name of that cartoon character with those big ears and fun World to visit real soon!!