Thirty years ago, the United States cemented their place in hockey lore with an incredible win over the Soviet Union.

While tonight's victory doesn't hold the magnitude of the "Miracle On Ice," Team USA pulled off another upset, defeating Team Canada, 5-3, for the first time in 50 years. 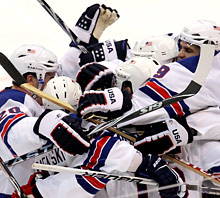 With the score tied, 2-2, in the second period, center Chris Drury (New York Rangers) gave the U.S. a one-goal lead. Martin Brodeur (New Jersey Devils) stopped a shot, but the rebound came to the front of the net. A scrum developed, and Brodeur attempted to poke the puck away from the pile. He couldn't get to it, and Drury swept the puck into the empty net for his second goal of the tournament.

Team U.S.A. captain Jamie Langenbrunner (New Jersey Devils) scored the eventual game-winning goal in the third period. With the U.S. on the powerplay, Brian Rafalski (Detroit Red Wings) took the puck at the point and fired a shot on goal. The puck caromed off of Langenbrunner's left skate and slid through the pads off Brodeur for Langenbrunner's first goal of the tournament.

Sydney Crosby (Pittsburgh Penguins) brought Canada within one at 16:09 in the third period. With Canada on a powerplay, Rick Nash (Columbus Blue Jackets) threw a pass to the front of the net. Crosby deflected the puck through the pads of Ryan Miller (Buffalo Sabres) for the goal.

The U.S. iced the victory with an empty-net goal at 19:15 of the third period. Ryan Kessler (Vancouver Canucks) chased down a loose puck in Canada's zone and dove at the puck. He put the one-handed shot past Corey Perry (Anaheim Ducks) into the empty net for the goal.

Miller made 42 saves, including stopping Nash on a point blank shot from the slot in the waning seconds of the third period. The goalie outplayed Brodeur, who finished with 18 saves.

With the win, Team U.S.A. clinched their pool. Pending the outcome of tonight's Finland-Switzerland game, the U.S. can become the top-ranked seed in the elimination rounds.

Rafalski scored two goals tonight, and now has four goals on six shots in the tournament...Zach Parise (New Jersey Devils) had one assist tonight. The Devils' left winger now has three points - all assists - in the tournament...Three of Team U.S.A.'s goals came from former or current Devils: Langenbrunner (1) and Rafalski (2)...Canada will now have to play back-to-back games Tuesday and Wednesday.