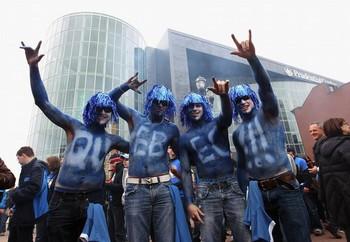 Go Nordiques!!...Wait What?? Who??Anyone at the Devils season finale or watching it at home would certainly have noticed a lot of blue shirts in the arena on Sunday April 10th. At a quick glance you might have thought that the Devil's cross Hudson rival Ranger fans had shown up to heckle the devils on their season finale as if failing to spoil their playoff chances on Saturday wasn't enough disappointment for the devils.

However this was not the case, the sea of blue shirts at the prudential center were fans of former NHL team the Quebec Nordiques.

Approximately 2100 Nordiques (1600 by bus and another 500 by car) turned out to the rock on Sunday. Many questions were floating around amongst Devil fans in championship plaza like "why are they here?" and "who are they supporting?". To put it quite simply the Fanatical Quebecois had arrived with an agenda; they want a team. For sixteen years now the Québecois have been without a team in the NHL when the franchise moved to Colorado and became the Avalanche due to financial woes.  As you can imagine many fans refused to change loyalty to geographic neighbors and bitter rivals the Montreal Canadiens. Do you see yourself as a future Ranger fan should the Devils ever leave NJ? And so formed the organization known as Nordique Nation; a traveling band of peaceful Quebecois who want to be heard by the NHL.

Whether the NHL heard them or not, one thing is certain; the NJ Devils and their fans heard them. The impact on the crowd at the prudential center was significant. Many laughs and cheers could be heard coming from Devils fans as the Quebecois were alternating their chanting between "Let's Go Devils!" and "Nordique Nation!" and on occasion "Martin Brodeur!", despite Brodeur not being on the ice. Every period at 16:10 a backwards countdown from ten in french would occur followed by cheering and colorful celebrations that lasted for a minute or so to represent the sixteen years the Quebecois have gone without a team. A French Canadian reporter was seen meandering through the crowd and interviewing various Devil fans on their impression of the traveling fan club. Towards the end of the game in the final five minutes the Nordiques flooded the lower level and began riling up the already standing crowd to maximal decibel capacity. It was unfortunate that a foreign fan base were more enthused than the Devils fans themselves. The crowd left the arena the same way it had entered, full of energy with smiles and thank you's to the home crowd.

As a side note the Nordique Nation had crashed a NY Islander game back in December with the same luster. The question then pops up; is it a Trojan horse scenario where the fan club is showing up to games of teams who have been known to not boast great attendances or is it a case of attending games of teams who are within proximity to them?  In any event it is clear that in the NHL money and politics speak louder than any group of fans can and whether or not Quebec will get a team back is unclear. Do they deserve a team? Undoubtedly.

- This article was submitted by guest writer Thom

Stan Lee and the NHL have teamed up to create a super hero for each NHL team. To check them out, visit facebook.com/theguardianproject but truthfully, don't we really care about one team only??

Meet our superhero. A Maverick of the Garden State, straight from the Underworld - now introducing the New Jersey Devil! 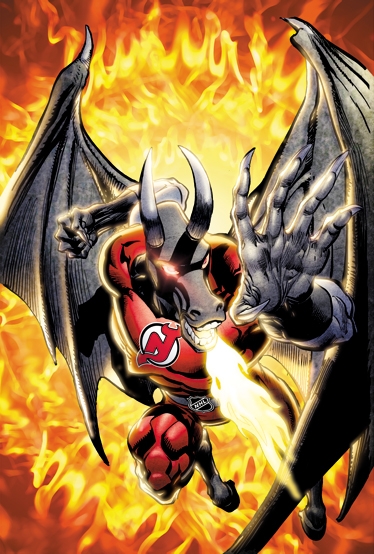 Every season the NHL releases a video to the general public that shows examples of what to do and what not to do. So that there is little confusing amongst our readers, I thought I would share the video with you. Notice the Richards on Booth and Cooke on Saavard hits from last season are shown as "illegal hits."

While browsing through my daily hockey reading, I came upon an interesting story on Puck Daddy. The NHL Network, a substandard highlight network for the NHL, will undergo some serious changes in the near future. The changes made should finally bring relevance to the channel and give hockey fans a reason to watch the network.

Continue after the jump to see the proposed changes to the league's network!

There is certainly a lot of discussion going on, either on the internet or hockey talk radio about some of the proposed rule change experiments at the R & D camp in Toronto. I thought this would be a good time to weigh in on some changes I would like to see, whether or not they are currently being experimented with at the R&D camp.

The war is on now. The NHL having defeated the grievance filed by Ilya Kovalchuk and the New Jersey Devils are now looking into other long term contracts that they haven't been thrilled with. Is Gary Bettman seeing the big picture here or only looking at what is right in front of his face? Has he forgotten what this league is all about and more importantly, has he forgotten how important the fans are to the success of this league?
no comments

The Chicago Blackhawks defeated the Philadelphia Flyers, 4-3, in tonight’s game six of the Stanley Cup finals to win their first Cup in 49 years.

Patrick Kane netted the winning goal at 4:10 of the overtime period. Kane skated the puck down the side boards and released a shot from the goal line. The puck snuck through the pads of Flyers’ goalie Michael Leighton and into the side of the net.

There was some confusion on whether or not the goal counted, but eventually replays confirmed the goal.

no comments
Here’s some news from this year’s IIHF World Championship:

Brandon Dubinsky (New York Rangers) opened the scoring at 11:45 of the first period. With Team USA  on its second powerplay, Dubinsky ripped a slap shot that beat Italian goaltender Daniel Bellissimo high on the blocker side for his third goal of the tournament.

The Italians seemed poised for the upset, taking the lead 6:49 into the third period. Stefano Margoli took a pass at center and made his way through Team USA’s defense. He took a wrist shot that beat Team USA goalie Scott Clemmensen (Florida Panthers).

Ryan Potulny (Edmonton Oilers) scored the equalizer, tying the game at 11:08 of the third period. With Team USA on a powerplay, Potulny crashed the net, putting a rebound past Bellissimo.

David Moss (Calgary Flames) almost gave the Americans a late victory with a breakaway chance. Moss tried a backhanded shot, but Bellissimo kicked out the right pad to block the shot to the corner.

By heading to overtime, Team USA clinched its spot in the IIHF’s upper division. The win helped relegate Italy to the federation’s second tier.

The last time these two teams met, the Russians were on the wrong end of a drubbing.

The rivalry continues to grow, and the quarterfinals match will be no different. Team Russia is undefeated in this year’s tournament, winning the first six games. They also have a 25 game IIHF World Championship winning streak, which started in the 2007 bronze medal game against – you guessed it – Canada.

Team Canada brought a young team to Germany, and its still trying to gel. They’ve lost their last two coming into the game against the Russians.

When asked about the matchup, Kovalchuk said he wished it would come later in the tournament.

Here are some notes from the IIHF’s World Championships:

Team USA In Relegation Round

Team USA, featuring defenseman Andy Greene, hasn’t had the best showing at this year’s World Championships. The team, which didn’t win in the opening round, will now play in the relegation round of the tournament. If Team USA cannot avoid elimination, they’ll move down to IIHF’s Division 1, which would knock them out of next year’s tournament.

The USA has really struggled on the powerplay, tallying once on seven chances so far this tournament. That’s only 14.28%, which has probably helped add to their winless record.

Devils’ defenseman Andy Greene hasn’t done very much for the national team. He’s averaged 15:08 of ice time through three games, but Greene still doesn’t have a goal or an assist. His +/- rating is -2, and he’s only recorded two shots on net.

The team will play its next game Saturday.

Team Russia, which features Ilya Kovalchuk, is currently 2-0 with six points in the World Championships. The team defeated Kazakhstan, 4-1, on Tuesday to move closer to the qualification round.

The Russian team, which failed to medal at the Olympics, sports several prominent NHL players, including Alexander Ovechkin and Alexander Semin. As Tom Gulitti explained, many Russian players promised each other that they’d play in the World Championships to avenge their poor showing at the Olympics.

In the continuing “Eastern Conference Playoff Preview” series, I’ll preview the Boston Bruins. The team,currently sitting eighth in the division, has been holding off the Atlanta Thrashers and the New York Rangers for the last spot in the playoffs. With injuries and a lack of scoring, the Bruins look to be one of the weakest playoff teams in the division.

One of the worst injuries for this team came when Marc Savard was concussed by Matt Cooke. Although he didn’t wow anyone with his offensive prowess, he still brought a gritty presence to the team. Without him, Boston has seemed to struggle without him. They shouldn’t have a problem scoring, with players like Patrice Bergeron, Marco Sturm, and surprise players like David Krejci. But the team ranks 30th in the league in scoring, with 182 goals scored this season. The team’s -33 plus/minus ranking isn’t great either. Both of those things show Boston’s lack of scoring depth. With the possibility of facing the Washington Capitals in the first round, that lack of scoring can really put the Bruins in a hole.

Zdeno Chara leads an average defensive squad for the Bruins. Chara leads all Bruins defenseman in goals, assists and points. He’s also the plus/minus leader. After Chara, there’s not much on the blue line. The defense, as a whole, ranks 30th in the league in goals against. A lack of scoring and a lack of defense? That doesn’t bode well for the playoffs.

Maybe one of the only bright spots for Boston is the emergence of goalie Tuukka Rask. The 6-3 Finn has solidified the number one position in Beantown, going 19-12-4 with a 1.99 goals against average. He’s far outplayed former Vezina winner Tim Thomas. His G.A.A. and save percentage (.930) are very, very good. If there’s one person keeping Boston afloat, it’s Rask. His play could lengthen a series. But without any solid scoring options or defensive play, it looks like it’ll all be on him to win them a series.

So, does Boston stand a chance in the playoffs? Like many of the lower seeds, they don’t look great. They lack a scoring offense, and the team’s defense isn’t that much better. The only bright spot, Rask, can’t steal them a playoff series. With Boston barely hanging on to the eighth seed, it might be a one-and-done year.