With the recent struggle of play over this six game stretch, many Devils fans including our staff at Running with the Devils are wondering what happened?

One of the obvious reasons is the team without Ilya Kovalchuk. As we all know, Ilya Kovalchuk is currently recovering from a shoulder injury which has been projected to sideline the All-Star for 2-4 weeks. When he went down against Florida on March 23rd, apparently so did the Devils. Ilya Kovalchuk has 10 goals and 17 assists in 32 games this year. His stats however don't speak enough volume for how much of an importance he is to the New Jersey Devils.

The Devils (0-3-3) have lost 6 games in a row and have gone from being a solid playoff team to not even participating in the postseason for only the second time in 16 seasons. To put things into a great perspective, the Devils went from first in the Eastern Conference all the way down to 10th. This is also the second time that the Devils have had a losing streak of 6 games or more.

Without Ilya Kovalchuk, the Devils are severely lacking in leadership, most importantly with the "Captain" Bryce Salvador. Since receiving the 'C' from Peter DeBoer, the fans have been upset with him believing the Ilya Kovalchuk should have received it. Along with the fans, I agree 100%. Kovalchuk is by far the leader in the locker room and it shows day in and day out when New Jersey is out on the ice. He leads by example and encourages all of his teammates around him to give 110%. He brings a toughness and hard work that nobody else on the team can muster up to. Since he has not been out there with his team, it's quite apparent how much of a leader that Bryce Salvador isn't. Bryce Salvador isn't the type of player that can motivate or lead a team just by his presence on the rink. I may not be in the locker room after games and I certainly don't know what goes on in their, but as a fan seeing this team perform without Ilya Kovalchuk makes it seem, to me, who the real captain is of the New Jersey Devils.

The Devils have also had a huge decline in goal contribution which has become more and more evident during this 6 game skid. The Devils have scored only 10 goals in the 6 games including being shutout at the hand of the Boston Bruins. The lack of contributions from players over this stretch like David Clarkson (1 goal), Travis Zajac (0 goals), and Adam Henrique (0 goals) who are big scores for New Jersey, is very concerning.

Finally, the horrible special teams. The Devils have absolutely been terrible on both powerplay and penalty kill. Nobody would have guessed that the Devils who had the best penalty kill from last year well over 90%, would be 19th this year with a PK hovering around 80%

The powerplay is 22nd with a 16% success. This speaks volume because the Devils get so many chances on the powerplay and are unable to produce, whether they miss the net or they're unable to complete crisp and solid tape-to-tape passes.

There is certainly feelings of unrest in New Jersey as the Devils look for someone or something to end this losing streak and help get them some points. The remaining schedule for the Devils is going to be hard but we will see what this team is made of as they hope to try and capture a playoff spot. 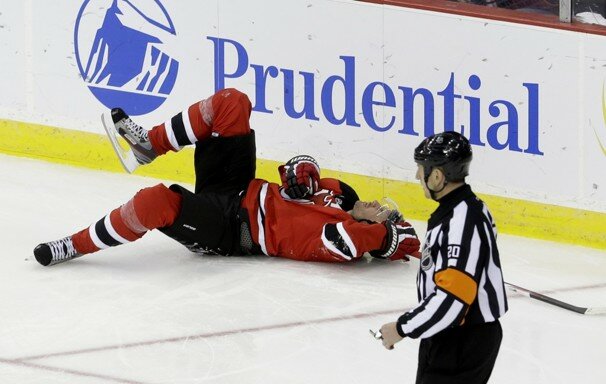