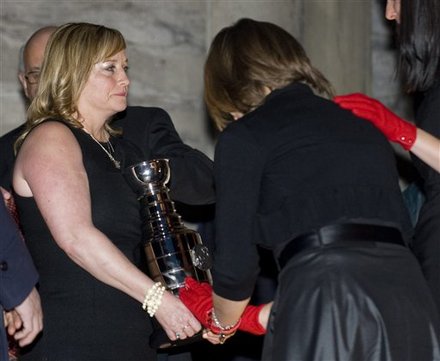 Line Burns seen holding Pats urnThere was a news report our of Montreal this morning that someone broke into the car of Pat Burns' widow during his funeral yesterday. The low-life that did this took  jewelry, 30 autographed hockey jerseys and the late coach's wallet. Burns' widow Line discovered the crime this morning. Police said they would launch a public appeal to the thieves, asking them to leave the stolen items in an agreed-upon spot where they could be recovered.

Pat Burns, who coached the Devils to the 2003 Stanley Cup title, died Nov. 19 after a long battle with cancer at age 58.

In what can only be considered a class move my Lou and the entire Devils organization, the entire roster of the Devils were on hand for Monday's service honoring the police officer-turned-hockey coach. Burns, who also had successful runs in Montreal, Toronto and Boston also had former NHL players Raymond Bourque, Patrick Roy, Tie Domi attend his services as well as NHL Commissioner Gary Bettman and Quebec Premier Jean Charest.

In one final thought, Pat Burns was cremated and the urn that his holding his ashes is a miniture Stanley Cup which is just about the coolest thing ever.

Condolences to the Burns family, and wishes of swift justice for whomever is responsible. Breaking into someones car at any point in time is just disrespectful of other people but to do so during a person's funeral is downright disgusting. I have a hard time believe that they didn't know who the car belonged to.