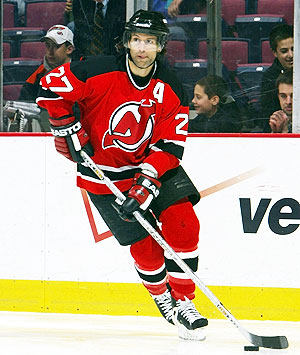 If there was one event I could change about the New Jersey Devils over the last 5 seasons, it would certainly be the day that Scott Niedermayer decided to go play hockey in Anaheim. Without a doubt, that was a sad day for Devils fans but I can understand exactly why he did it. Even though he left NJ, Scott Niedermayer in my mind is a Devil through and through and will always be a part of this family. I wouldn't be surprised to see him involved with this organization at some point in the future. It seems too early for him to retire but if you look at the list of his accomplishments, there is little left to motivate him through an entire NHL season. It is a sad day for the NHL to watch a guy like Scott Niedermayer walk away.

Before I go into sharing some of my own memories of Scott's time in NJ, I wanted to touch on the subject of sending #27 to the rafters. There was talk around the internet yesterday that the Devils shouldn't retire his number because he didn't finish his career here. To me, there is a core group of New Jersey Devils that have have been extremely important to this franchise and deserve to have their number hanging in the rafters. Two members of that group already do have them up there. The other two members that make up this core are Niedermayer and Brodeur. (Insert your argument here that Elias is part of that core group as well). It doesn't matter that he left NJ to play elsewhere. What matters is that he was an important part of the 3 Stanley Cups that were won during his time here and that he was a leader on and off the ice and that I can sit here and honestly say that if he didn't play for NJ at all, we might not have 3 cups. Let us know how you feel by taking our poll over in the sidebar. Apply

After the jump, I look back at the memories I have of Scott Niedermayer during his time in NJ.

Scott Niedermayer was a great defenseman and had a way of shutting down the other team but it was his offensive awareness that really made him lethal. The best example of this that I can come up with would be Game 2 of the 1995 Stanley Cup Finals when he took the puck deep in his own zone and went end to end and beat 3 Red Wings and Mike Vernon. Don’t remember it, revisit it here. Scott had many moments like this; he did it shorthanded in Game 6 against the Stars in 2000 and probably a few more times.

Scott Niedermayer also had an edge to his game that made him dangerous. Most recently I remember him trying to spark his Ducks by starting a big brawl when he went after Datsyuk during the 2009 playoffs. I certainly won't forget the images of him beating on Valeri Kamensky while Kamensky's jersey was wrapped around Niedermayer's head. There were moments where Niedermayer didn't think and only reacted, such was the case when he popped Peter Worrell in the head with his stick while sticking up for himself and a teammate. Finally, I don't think any Devils fans will forget the images of Niedermayer lying on the ice after Tie Domi threw a vicious elbow at Niedermayer's head in the 2001 playoffs. One of the non-hockey memories I have of Niedermayer is that when he was first in the league, it seemed like every hot chick that was a Devils fan, owned a Scott Niedermayer jersey, well at least they did until Marty came along. Yes, you can base a guy off of who is wearing his jersey in the stands!!

Like I said above, it was a sad day to watch Niedermayer announce his retirement. I say Thank You to Scott for everything the he did while he were here and I hope that one day, that awesome duo of Niedermayer and Stevens that sat behind the Blue Line will one day stand behind the Devils bench together.