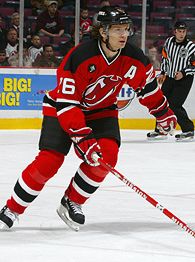 Well this certainly isn't a good start to Lemaire's time in NJ, not that this has anything to do with him. Patrick Elias will miss the next 3-6 weeks after having surgery yesterday to remove some scar tissue in his groin. Elias initially had surgery in June to repair a torn labrum, a tear in his adductor muscle and an impingement on his hip. He's been experiencing some discomfort with the groin since that has kept him from skating in training camp.

It's hard to lose someone like Elias for any amount of time and at any part of the season but the good news that I can see in this is that they figured out exactly what was causing the discomfort and were able to go in arthroscopically and take care of it. If I have to lose him, I prefer October to April. The Devils insist that this isn't anything like the surgery that Elias had earlier in his career or the sports hernia surgrery Jamie Langenbrunner had two years ago.

"We'll be looking for another center," Lemaire said on Tuesday. "He's an important part of this organization, but we have to expect that. I'm getting used to this, missing the top player." I will agree, Lemaire seems to be getting used to missing his top guys as he had to deal with a missing Marian Gaborik for much of last season in Minnesota.

In other Devils notes, Yann Danis will start in net tonight against the Rangers and rookie Jeff Frazee will play the second half of the game. Also, Kevin Weekes has signed with Hockey Night in Canada and the NHL Network as a commentator.

I don't get the oppurtunity to sit in on Devils training camp, it's just not a privelage I have. I would be cool to be able to do so but that's just not my job. So instead I read many journalists sites that do get that oppurtunity and try to piece together the things that are happening.

It would seem that Lemaire has been pairing Shanahan with Zajac and Parise on the top line early on in training camp. This doesn't mean that this will eventually be the Devils number one line just that its something Lemaire is toying with, for one reason or another. I personally thought the Zajac/Langenbrunner/Parise line last season was very effective and put up decent numbers and is something I wouldn't change. I understand you want to switch lines around in practice in order to have guys feels comfortable playing with other guys in case on an injury, so maybe this is what Lemaire is doing. Whatever it is he's doing, I think a lot of other sites are making a bigger deal out of this then is neccessary but when talking hockey, this time of year can be a little slow. The Devils open the preseason against the Rangers tomorrow night at The Rock and I'd imagine Shanny will probably be on the top line tomorrow night. I've also read on various sites that Pandolfo and Langenbrunner probably will sit out the Pre-Season opener, which is very normal because we need to see some if some of the young guys have what it takes. Marty will most likely sit as well and it's thought Denis will have the job of stopping the Rangers shots.

Pre-Season or not, we ALWAYS want to bury the Rangers!!