Tweet
For the first time in our 2009/2010 player reviews, we get to focus on a guy whos main job it is to put pucks in the net rather than try and help keep them out of the net. Today we focus on #8 Dainius Zubrus 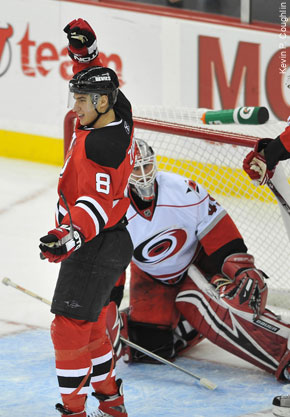 Zubrus's Numbers: Due to injury, Zubrus only played in 51 regular season games. He scored 10 goals, had 17 assists and found his way to the penalty box 14 times for 28 minutes. Zubrus found the back of the net once in the series against the Flyers.

My Thoughts: On November 19, Zubrus blocked a shot by Predators defenseman Kevin Klein that ended up fracturing his right patella (kneecap). His 2009/2010 numbers are pretty close to the numbers that we have gotten out of him since his arrival in NJ. He missed 31 games this season due his kneecap injury but only ended up 5 goals shy of what he had last season a 8 assists shy of what he's had the past 2 seasons.

Zubrus's Future: Zubrus is in the middle of a 6 year $20.4 million deal that he signed back on July 3, 2007. That was the year that the Sabres lost Brier, Drury and Zubrus in the free agency market. While most thought Zubrus was probably the least desireable of those 3, he certainly fits well into the Devils system. Sure, he's not a point a game type of player but he's a large guy that can throw his weight around and is extremely effective at crashing the net. Need some proof, watch his gwg against the Bruins on Ocotober 29th. (watch it here!!)

Zubrus is here to stay so we certainly don't need to discuss whether or not he should be but the answer to that question in case you were wondering is yes he should stay. At times, I feel like we don't use Zubrus enough and I am hoping that who ever is behind the bench next season can figure out how exactly to make the most of Dainius Zubrus and return him to his 20+ goals per season.