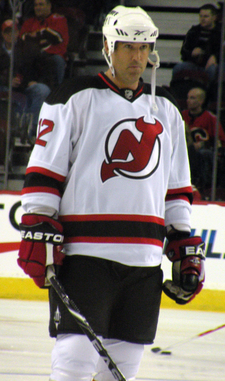 Rolston's Numbers: In 80 games, Rolston scored 20 goals and had 17 assists. He found the net 7 times on the powerplay and had 3 GWG's over the season. He ended the season as a +2 and served 22 minutes in the penalty box. In the series against the Flyers, he found the net twice and registered one assist. It's probably important to note that the two goals scored were done so on the powerplay and both scored in the same game.

My Thoughts: If you go through the 2009/2010 archives on this site, you will notice a theme early on. I was proudly spear-heading the "We Hate Brian Rolston" campaign. After Lemaire signed on to coach this team, everyone was talking about how Rolston was going to have this incredible season and that 30 goals was a realistic number for him. He was a Lemaire type of guy and he was going to be the guy that carried this team. Early on, Brian Rolston was awful. I don't know if the expectations being put on him were just too much but he wasn't delivering. I can't tell you how many times I watched Rolston sail a shot wide of the net. When the first month and a half of the season were completed, Rolston had a pathetic 4 goals and 3 assists.

As the season progressed, Rolston seemed to get a little more comfortable. Sure, 20 goals isn't what people expected but its a much better number than what I thought we were going to get out of him by the middle of November. With that said, I guy who makes $5 Million per season should be putting more pucks in the net or helping other guys do so.

Rolston's Future: If you read the various Devils forums around the internet, there is a common thought among Devils fans which is Rolston must go this summer. In fact, on a poll on NJ.com. 77% of the voices said Rolston needs to go but unfortunately it just isn't that easy. Rolston is among a group of Devils who currently holds a No Trade Clause on his contract, meaning unless he says "Ok Lou, I will go" we are stuck with him and his mega contract. (My hatred of No-Trades is a topic for another day) So, since Rolston holds the keys to whether or not he stays, we have to assume he is staying and lets hope whoever takes over as the next Devils coach can find a way to get more production out of Brian Rolston. I will say this, when Ilya Kovalchuk and Brian Rolston were on the ice at the same time, the Devils were downright scary when it came to the velocity of their shots. Accuracy not so much but I wouldn't want to be a defending getting in the way of those two.