The New Jersey Devils dropped their seventh consecutive contest on Sunday evening by a score of 3-2. The Devils, though, came away with a point after forcing a shoot-out. The Buffalo Sabres narrowly defeated Jersey's Team after a hard-fought, physical battle.

Early on, turnovers cost the Devils--big time. Patrick Kaleta netted an early goal for Buffalo to give his team a 1-0 lead. Andy Greene turned the puck over in the defensive zone on a blind outlet pass; Jochen Hecht threw a lazy shot on goal that was deflected home by Kaleta. Greene appeared to be frustrated after the play, but I guarantee you that he was not nearly as frustrated as any Devils fan in the country (myself included).

New Jersey kicked it into full gear after allowing the first goal. At one point, the Devils were successful in pinning the Sabres deep in their own zone for a solid two-plus minutes. As a result of the sustained pressure, the Devils were able to draw a cross-checking penalty out of Kevin Porter at 18:15 of the first period. Steve Sullivan tied the game for Jersey in a matter of seconds with his first goal as a Devil since 1997. Sullivan's goal was assisted by Steve Bernier and sent the Devils into the locker room with a boost of confidence and momentum. 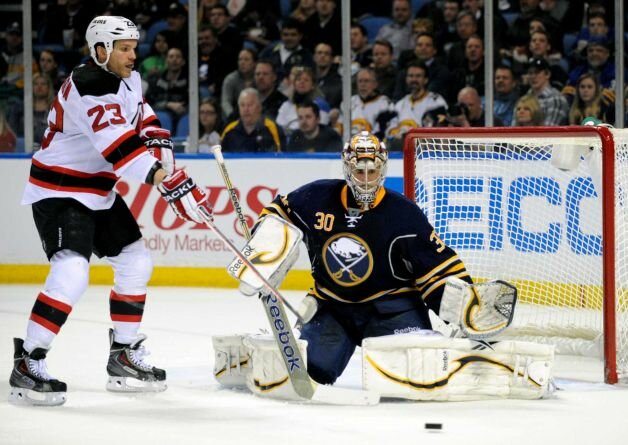 The Devils surrendered some of that momentum in the second period when Steve Ott netted the go-ahead goal for the Sabres. Ott's eighth tally of the season came 13:44 into the middle frame; the goal, as fans have become accustomed to, was a result of a complete defensive breakdown. Ott stood wide open in front of Martin Brodeur and fired it home. Anton Volchenkov can be seen on the replay "puck watching" from the top of the face-off circle. I would honestly like to know what is going through the heads of the defensemen as these plays are happening...

The one defenseman who had something to contribute tonight was Mark Fayne. Fayne scored his first goal of the season--and first in over a year--to tie the game at two just 5:46 into the final frame. Fayne's goal came while the Devils were on a penalty kill and marked the 10th short-handed goal for New Jersey on the season. Dainius Zubrus made a nifty play to send the puck to a streaking Fayne in front of the net. Fayne's wrister beat Ryan Miller on his blocker side and restored the momentum back to the Jersey side.

After a quiet remainder of the period, the Devils and Sabres headed into overtime tied at two. New Jersey out-shot Buffalo by a count of 37-22 in regulation but could not come away with anything to show for it. Both squads failed to score in the overtime period.

Tyler Ennis shot first for the Sabres in the shoot-out and lost control of the puck. Steve Sullivan was stopped by Miller on the Devils' first attempt. Nathan Gerbe rifled one past Martin Brodeur to start the second round; Patrik Elias was stopped (and by stopped, I mean TRIPPED) by Ryan Miller in his attempt. Steve Ott and Travis Zajac were unable to connect on their attempts, which sealed the deal for Buffalo.

The Devils are back in action ("action") on Wednesday night against the Boston Bruins. Puck drop is set for 7:30 PM. It's not over until the fat lady sings, but she is definitely warming up those vocal chords.