The Devils forgot to show up for this one. Before I even made it downstairs to turn on the TV, the game was pretty much over. I mean seriously, how rediculous is it that you didn't even need to  tune into the first 2 minutes of the game to see the game winning goal?

Gionta gets the Canadiens on fhe scoreboard quickly. :11 seconds into the game, the Canadiens are already up b a score of 1-0.  It should be noted (and I am surprised) that Gionta's goal is not the quickest goal in franchise history. Washington’s Yvon Corriveau scored 10 seconds into a 3-2 Devils’ win on Jan. 14, 1990 at the Meadowlands 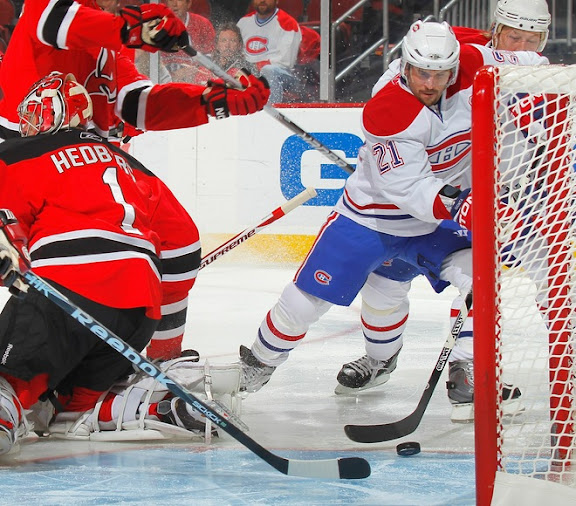 Lars Eller would score at the 1:38 mark of the game, giving the Canadiens a 2-0 lead. The question I wondered was, where was Hedberg because his focus certainly wasn't on the Canadiens. McKenna replaced Hedberg after the 2nd goal and would go on to stop a Tomas Plekanec penalty shot which seemed to energize the Devils a bit as they played a little better the rest of the period. I wonder who holds the record in the NHL for getting yanked out of net that fastest. Hedberg might  challenge that record.


The better play by the Devils at the end of the first was short lived. 2 1/2 minutes in Tom Pyatt made it 3-0  Canadiens. At 8:37, ex-Devil Scott Gomez made it 4-0 which pretty much sealed the deal in most fans minds. The Canadiens haven't given up more than 3 goals in regulation yet this season and I really didn't think that was going to happen. 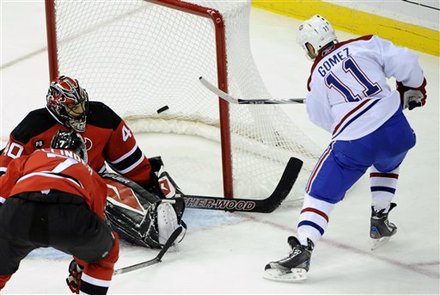 A little over a minute later, Beniot Pouliot made it 5-0 and it was clear the Devils didn't come to play tonight. Montreal would just continue to punish and push around the Devils for the rest of the period. The Devils would end up with 2 mins of 5 on 3 near the end of the period and they only got 4 shots on net and failed to score. In fact NJ is 0 for 4 on 2 man advantages this season.

The third period was so unexciting that the Devils should probably refund some of the money paid for tickets to those ticket holders because they certainly didn't get a full three periods for their money. Some may argue they didn't get anything from the Devils all night.

Elias sets up Arnott midway through the 3rd for his team leading 9th goal of the season but really, who cares its 5-1. Only good thing you can say is that the Devils didn't get shutout. Horn ends, fans boo, Devils lose and its all smiles for the Habs. 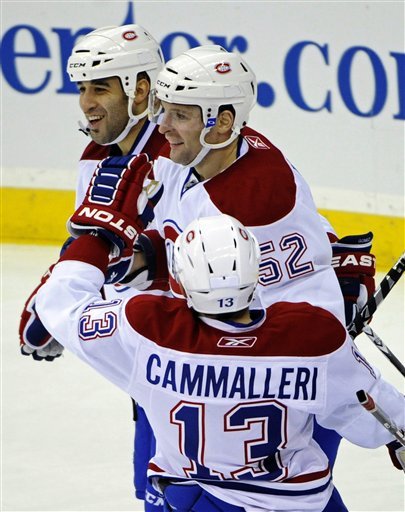 I don't want to start questioning the coaching staff but at this point how can you not? I mean the Devils play inconsistent hockey and that has to be the coaches responsibilty. The thing is, Maclean did a great job in Albany last year, that is why he got this job so I am a little shocked that he's having so much trouble with this team. The defense was horrible tonight and I certainly forget that this is a Larry Robinson coached defense because they don't play anything like the defenses coached by Larry in previous seasons.

Kovalchuk has now matched his longest scoring drought of his career. In fact it goes back to his rookie season when you expect guys like him to struggle. I'm not sure what the answer for Kovalchuk is but it needs to come soon. Sadly, the Feb 4, 2010 deal is paying off hugely for the Thrashers as the first round pick they received from NJ was used to bring in Dustin Byfuglien this summer and he has been such an added assett for them. Meanwhile, one of the NHL's top snipers continues to struggle as he is yet again a part of the team in the basement of the NHL.

Every goalie is allowed an off night, its just too bad tonight was that night for Hedberg. Its hard to say he looked bad because he only played 1:38 but when you get pulled that quickly, what else can one think?

Devils better figure out what happened tonight quickly because they get to play the Flyers at 1pm on Saturday and you know the Flyers will want pay back for the loss last weekend.


1.  Lars Eller - Gets the game winner 1:38 into the first, gets Hedberg yanked and pretty much ends the game before fans even get to their seats with their first period hot dogs.
2. Brian Gionta - Tells little brother "you may wear my NJ number but you'll never score a goal quicker than that!!"
3. Mike Cammalleri - had more shots on goal than anyone in Devils uniform