Would Pau fit in with the Bulls?
Angels place Jered Weaver on DL
Iowa quarterback James Vandenberg had a much more entertaini
Sixers future uncertain, except Doug Collins
Allen Wranglers cut Terrell Owens
Texas Rangers to sign Roy Oswalt
Will the Dolphins entertain on \'Hard Knocks?\'
While you were barbequing... TCU lost a key transfer
10 Mid-Major guards to watch in 2012-13
Are the Kings really still underdogs?
A Memorial Day Thank You
Evaluating Damontre Harris to Florida 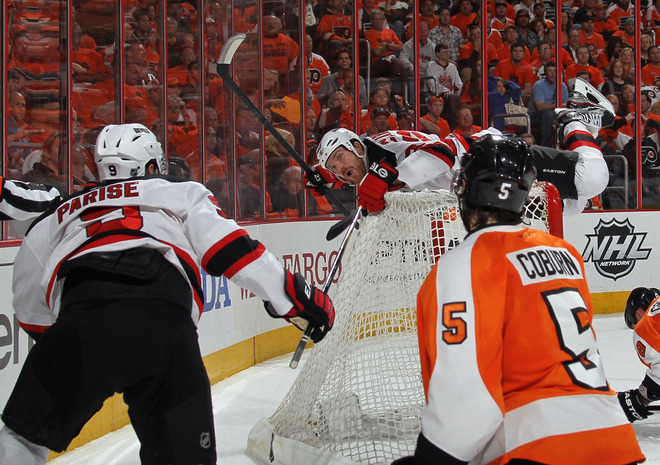 "Tonight I'm planking but on Thursday it's all about Tebowing!!"

You couldn’t escape the fact that Ilya Kovalchuk wasn’t in the lineup last night, mainly because Pierre Maguire and Kenny Albert weren’t going to let us forget. Guess what, it didn’t matter. The Devils worked hard all night and found a way to get the job done. They kept their frustration levels in check as Bryzgalov seemed to answer everything the Devils threw at him in the first 2 periods.The Devils kept at it and eventually solved the Philly netminder and put 4 unanswered goals past him (ok, one was an empty net goal).

In his post-game interview, DeBoer was asked if he was surprised how the Devils responded without their sniper. “I really felt we would respond like this,” proud Devils coach Pete DeBoer said. “It’s not more than I expected. It is what I expected. I knew we’d be better than Game 1. I think there were some obvious reasons why we ran out of gas a little in Game 1. I knew we’d bounce back. We’ve dealt with adversity of injuries and things all year and I really felt that we’d have a great game tonight and we did.” The one thing the media seems to forget is that Kovalchuk isn’t the be all end all of this team.

I thought the Flyers did a good job matching up against Elias and Parise, like I had thought the missing Kovalchuk would allow them to do but tonight was about those next tier guys that you need to step up this time of year.

Larsson tied the game at 1-1 when he took a nice little dish from Zubrus and beat Bryzgalov high to the glove side. You had to feel good for Larsson who has been a healthy scratch for all of the playoffs so far. Yes he’s made his mistakes but he’s worked hard all year, gets inserted into the lineup when his team needs him the most and scores his first playoff goal in his first playoff game. He even made some nice breakout passes throughout the game.

We’ve been waiting for Clarkson to show up in the goal scoring column and like most of his goals this season, his first of the playoffs came in a huge spot. He passed the puck off to Parise and followed the play to the net, which resulted in a nice juicy rebound sitting there for him to drive home. Of course the goal was nothing compared to what happened after the goal as Clarkson somehow ended up on top of the net.

Zajac sealed the game when he took a Gionta rebound behind the net and beat Bryzgalov on a backhand wrap around before he could get over to the post. Salvador then put home a crazy, bouncing empty net goal from his own blue line to send the Philly faithful home.

Bryzgalov was the big story in the first two periods of this game but the Devils hard work and ability to overcome the frustration of a goalie standing on his head ended up being the bigger story by the end of the game. The series shifts to NJ knotted up at 1 a piece.

A few more quick thoughts on the game

The RWTD 3 Stars of the night

* - Travis Zajac - He's putting his name in the hat for the Devils MVP of the playoffs. 5 goals and 3 assists in 9 playoff games.
** - Adam Larsson - Solved the Philly goaltender and got the Devils rolling down the hill.
*** - David Clarkson - Put home the game winner and then gave with Internet plenty of material for some photoshop fun!!