Harbaugh expects Ravens\' safety Ed Reed to play in 2012
Patriots reign in AFC East; rest of the division a crapshoot
Are sponsor logos on team jerseys around the corner?
Pittsburgh Penguins fire lead team doctor
New report claims Al Golden was involved in illegal recruiti
Big 12 Preview Week: Ranking the Fanbases
Big East: 5 freshmen to watch
Advertisements coming to a jersey near you
Someone is going to pay Darko money to play basketball this
The dozens: the 12 best shooters in college basketball
Dugout Digest - the Reds are taking control
The Mets Still Have Yet to Throw a No-Hitter 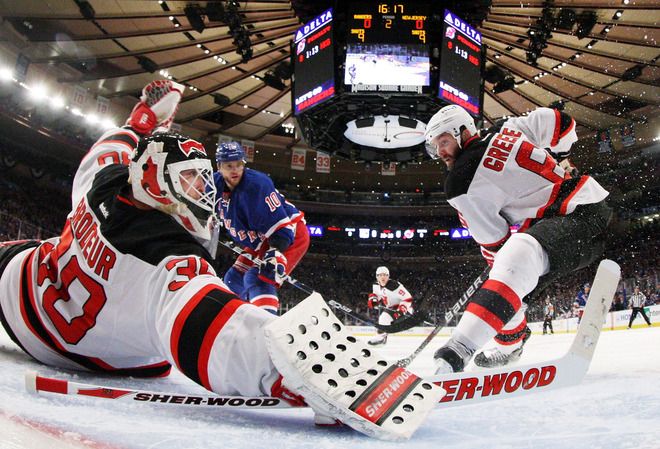 Well that didn’t go exactly as we had hoped. I wasn’t 100% confident that we could go in there and win Game 1 but I did think that we would have generated a little more offense than we did. We knew the Rangers do a great job at blocking shots but even though we knew it, it’s still so frustrating to see. I’m not going to take anything away from Lundqvist, he is a good goalie but if the guys in front of him aren’t blocking so many shots, how good is he? I’d like to pepper him with rubber so that we can find the answer to that question.

The reality is that the Devils gave themselves a chance after the first two periods but somewhere between the end of the 2nd and the beginning of the 3rd the team got sloppy. After a 0-0 tie through 2, I was worried that 1 mistake was going to result in the winner and the Devils made the mistake. They forgot about Girardi who came off the bench and just fired home a slapper from the blue line. After that, the wheels just kind of came off.

It’s just 1 game. We made some mistakes, we have things to fix but it’s just 1 game. We’ve been down a game in the playoffs before and have always responded well. I think DeBoer will make the right adjustments needed to get the Devils back into this.

The bottom line is a 3-0 loss to the hatred Rangers is never a good feeling and I think today will be full of feeling crappy and putting up with gloating Rangers fans who are acting like the Canyon of Heroes parade is this afternoon (I came into work to find doughnuts in the kitchen because of the win) but it’s not the end of the world. There is a lot more hockey to be played. So until tomorrow when we can right this ship, hang in there Devils fans!!