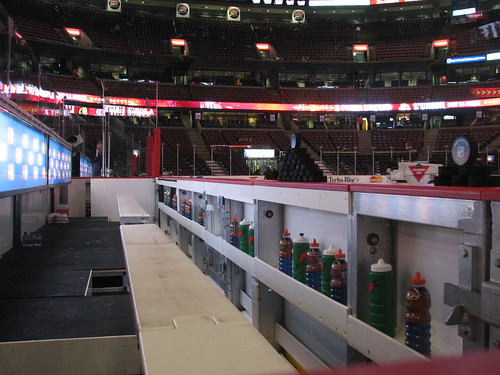 Who will end up behind the Devils bench next season?Well, here we are again. It seems that ever since I've start this Devils blog, one thing remains constant, that the Devils are spending the off-season looking for another coach. Two years ago, Sutter left us because he was crying about time away from his family, in came Lemaire. Last summer, Lemaire decided he had enough and in came Johnny Mac. We all know how that worked out but once again, Lemaire has said that he isn't returning to the Devils bench next season.

Take my thoughts for what they are worth because I didn't think hiring MacLean last season was such a bad idea but it turned out to be a very bad idea.

The important thing here is finding a long term type of coach. This one year, two year kind of coaching staff doesn't work. That was part of the reason I felt that MacLean was a good choice last summer. He was young and he had the appearence of a guy that would be behind the bench for a long time.

However, my first choice as coach at the moment defies everything I just said. Ken Hitchcock knows how to win. He's gotten the best out of some of his players, made deep runs in the playoffs and has even won a cup. The rumor is that he wants the job in NJ. I think he'd fit because of all the names I've heard thrown around, his style of coaching and playing closely resemble that of Jaques Lemaire and this team seems to really respond to that kind of coach. But, and this this a big but, he doesn't appear like a guy who will stay behind the bench for very long so should Hitchcock come on, I would think that in 2-3 years, we'd be right back here.

So if we are looking for a long term kind of coach, and don't mind a few growing pains, which could me missing the playoffs again next season, here is my list of other guys I would like to see.

Kirk Muller - He's done a great job in his role with the Canadiens. Yes, he'd be a rookie head coach and after MacLean, I'm not sold on going that route but he's young and like MacLean, has the appearence of the kind of coach that could still be here in 5 years.

Mike Haviland - I kind of thought he was going to be named the coach last summer. The Devils appeared to be waiting until the Blackhawks won or exited the playoffs before naming MacLean so I just thought they were waiting for Haviland. He was born here, he's 43 so he has plenty of years ahead of him but like Muller, has no head coaching experience in the NHL.

That's my short list, a list of guys who I would be happy with, any of them. There are some other names floating around that I wouldn't be too fond of. That list includes:

- Marc Crawford - I just don't like the guy
- Michael Therrian - Never really thought he had control of the Penguins, even though he got them to the Finals.
- Guy Carbonneau - Never thougt he did a great job in Montreal.
- Peter DeBoer - A lot of people like this guy but Florida was bad

If Carolina were to let go of Paul Maurice, I do think he would jump to the top of my list. However, I don't see them letting him go again. They made that mistake once, it did pay off for them because they won the cup with Peter Laviolette but then ended up firing him and rehiring Maurice.

So who's your choice? Any of the guys I mentioned of someone who I didn't even think of?