Anatomy of a hail mary
The trap of mediocrity
UNLV fans with classic Mike Moser sign
Anderson Varejao has a broken wrist
Bruins prospect Carl Soderberg may be headed to the NHL
Video: Each of the 38 points Jeremy Lin scored on Friday
Does AJ Burnett make sense for the Pirates?
The five teams that improved the most this offseason

Weighing in On "The Call" 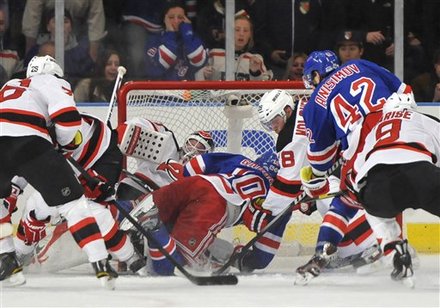 The call is all anyone is talking about this morning when it comes to the 1-0 shutout by the Devils. Were the refs right to disallow the goal? Did Volchenkov make contact with Gaborik as he was crashing the net? There certainly are a lot of opinions going around, so hey, why not throw my opinion into the ring with the rest of them.

Let’s look at Volchenkov to start. Yes, he was making contact with Gaborik as both players crashed the net. I disagree with Dave Maloney, who after the game said Volchenkov looked like he was “backing away” from Gaborik. I don’t think any player can “back away” when crashing the net but I think he put the brakes on just as much as Gaborik did. In this case, I am ok with the contact being made. Volchenkov didn’t extend the arms and didn’t give an extra push to propel Gaborik into Broduer. My first initial reaction to the replay was that Volchenkov was hooking him as the players went to the net, not pushing him into Brodeur. Initially Volchenkov was leaning on Gaborik as they approached the net but once both players put the brakes on, I thought it was more of a hook than anything. You do have to allow players some incidental contact when crashing the net so I never thought Volchenkov went over that line.

Gaborik’s mistake was that he didn’t try to avoid Marty at all. Yes there was snow from the skate which signifies that he was putting on the brakes but you need to do a little more than that. Especially since I think the stopping motion was more from trying to get his legs open vs trying to stop. There has to be some effort to keep from knocking the goalie over. In some replays, it does look like Gaborik’s elbow comes up and makes contact with Broduer, which if you are trying to bail out of a push, that wouldn't happen.

So right or wrong, the refs are going to call interference on a play like this 9 times out of 10. I think it's pretty clear why the Rangers fans think it's a terrible call and why the Devils fans thought it was interference. It’s very understandable either way you look at it. I watched the replay a good 100 times. The call seems consistent with other goalie interference calls I've seen this year but consistency doesn’t always mean it’s the correct call. I can see both sides so I can’t disagree with the call and I would say the same thing if the call wasn’t made and the goal was allowed but you’re going to have to take my word on that one.The goalies, like a QB in football, are protected to some point and I believe that from the refs angle, he didn’t think that Gaborik did enough to try and keep from hitting Marty, so he made the interference call.  When you aggressively crash the net, occasionally you will get an interference call. That's just how it is. Tortorella's reaction was extremely comical, I probably watched that a serperate 100 times.

Sometimes the calls go your way, sometimes they don’t. There was no interference call on Callahan when he rolled over Marty’s ankle and there was no high sticking call when Taoromina took one to the face in the corner.

Then there was Gaborik’s quote at the end of the game and it’s a beauty.

"I don't understand," Gaborik said. "It's frustrating. If I would have run him, I wouldn't say a word. But the guy pushes me into him. I tried to open my leg for a pass, I tried to stop. But he just pushed me into Brodeur."

Basically, Gaborik is saying that if he had run Marty he’d be quietly deceptive about it as opposed to saying yes, I ran into him but since he felt that he didn’t run into Marty on purpose, he could speak openly and honestly about the incident…. Right!!!! That quote is getting saved for a rainy day.

The Devils / Rangers rivalry never gets old, something new always gets added. Judging the way that this game started off and the way it ended, I can honestly say that I am glad that we have 3 more meetings with the Rangers over the next few weeks.

This is what I will take away from this game. Ranger fans, while feeling robbed on the call should look at the whole picture and wonder why their team didn’t show up for the first part of the game. If they had, maybe it wouldn’t have come down to the last 3 seconds and a questionable call. Their PP is crap and coming from a Devils fan, that’s a mouthful!! If the Rangers are going to find success in the postseason, they certainly need to work that issue out. Again, the last 3 seconds weren’t about generating only 4 shots on 3 power plays.

The Devils continue to disappear in the third period. Marty played an outstanding game last night and the Devils won because of that. Whenever you are outshot 15-1 in a period, you can’t feel great about having played an entire 60 minutes. The Devils have done well in 1-goal games this season but how many times can you let a team outshoot you like that. Saturday it was 24-1 in the third against Philly and now 15-1 against NY. That is a huge shot differential.  I know Cam Janssen doesn’t play every game but I think his role on the team has helped Clarkson focus more on the role he is playing this season. In the past, it was Clarkson’s duty to be the enforcer, with Janssen and Boulton to some extent, that role is no longer on Clarkson. The Devils have put together 5 in a row and have been playing decent hockey lately (other than the third period) and have done this all while a certain defenseman named Tallinder sits on the injured list.. coincidence??

So in case you missed it last night, here’s the incredible beginning to the game…