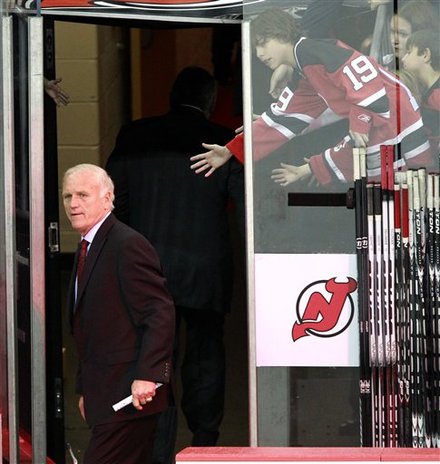 Lemaire leaves the ice for the final time this season.The Devils played 82 games this season and for the first time since the 1996 season, they don't get to play more than that. This season started with such great promise. Kovalchuk was supposed to score goals with ease, the line of Kovalchuk, Zajac and Parise were supposed to put up incredible numbers and Arnott was suppose to reignite Elias. Not only were the Devils supposed to be playing an 83rd game, they were picked by many to have a deep run at the cup. It didn't happen and we the fans knew early that it wasn't going to happen.

So what went wrong? What went right? Well, here is my list.

1. John Maclean - Plain and simple, he wasn't ready to be a head coach in the NHL. In fact, I'm not even sure its about being ready, maybe he's just not a head coach kind of guy. The Devils never looked ready for their games with him behind the bench, their play was very sloppy and the players just never responded to his rants and discipline. Yes the players need to be held accountable but when Lemaire came in and said he'd never seen a more out of shape bunch of guys, you knew just how badly MacLean ran this team.

2. Injuries - In a season that consists of 82 games, sometimes on back to back nights, sometimes 3 games in 4 days, you are going to have injuries. Every team has them but the Devils lost a veteran defenseman for the entire season before the season began and lost a prolific scorer and team leader very early on. No team is deep enough to make up for that.

3. Marty Broduer - He showed his age this season. As the year went on, he got better but in the very beginning of the season, he looked terrible. Injuries were a problem as well and it reminds us that he isn't getting any younger and hopefully the Devils management is looking at the future and planning for life without Marty.

4. Henrik Tallinder - I'm sorry, this guy is awful. Early on in the season, the opposition would blow right by him as if he were standing still. In the Rangers game on Saturday, guys were STILL blowing right past him. He hasn't really improved and I am really surprised he only ended up a -6 for the season.

6. Lack of Scoring - as always, the Devils had a tough time finding the back of the net. We're Devils fans, we're used to that but in the past, we've had the defense and goaltender that kept us in low scoring games. This season it was a much different story. No scoring + shakey defense + aging Marty = Tee times in April instead of playoff games.

1. Jaques Lemaire - Thank god Lou called him around Christmas and thank god he decided that he wanted to come back to NJ. Yes, they didn't make the playoffs but he made the season enjoyable and for a brief time, had a lot of people believing the Devils could make a run at the playoffs. He got his team to battle back from 23 points out of the final playoff spot and got as close a 6 points out. He took over a team that was 9-22-2 and got them to finish 38-39-5. Just imagine what NJ could have accomplished if he didn't leave last summer.

2. Johan Hedberg - Hands down, the best move the Devils made last summer was signing Hedberg. He was clutch at times and was able to put Marty on the bench as a spectator for stretches. No one has done that before!!

3. Trading Jamie - The guy had to go and he wasn't adding anything to this team. As soon as Jaques came back, we all knew Jamie's days were numbered. He was a UFA this summer so I think what we got for him was more than adequate.

So now we get to sit on the sides and watch the other teams compete for the Stanly Cup. It's not a great feeling knowing your team doesn't get a shot but lets be honest, this is the first time in 15 years we missed and only the 3rd time in the last 23 seasons that the Devils have missed the playoffs. In 1997, the Devils returned to the playoffs and if it wasn't for the dumb "in the crease" rule, probably would have found themselves in the Eastern Conference Finals. Lets hope that rings true about 2012!!!

I'm sure at the offseason progresses, we will have much more on the 2010/2011 season as well as stuff for next season. Please stay tuned!!