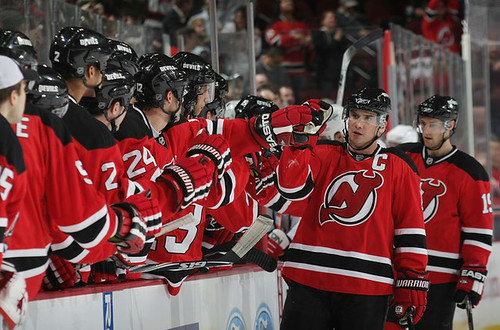 The Devils news is once again a little slow. What is that term we like to throw around?? "Status Quo"... That’s pretty much where we are today. We are waiting to see if the Devils can work out a deal with Zach Parise prior to an arbitration hearing. If you recall, the Devils signed Travis Zajac to a 4 year deal on July 22 back in 2009, which happened to be two days before the two sides went before an arbitrator. Let's hope the same will be done with Zach Parise. The Devils took care of the other needs last week after Greene and Hedberg were signed once they hit the open market. We are also waiting on news that the Devils have hired the next head coach for this organization.

I'm not one that likes to report on rumors but right now it is all we have. Rumors came out yesterday stating that Guy Carbonneau could very well be the next coach. He fits most of the criteria for the Devils so it makes sense. He’s been a coach, he’s currently available to coach and he has spent time in the Montreal Canadiens' organization, which has been a coaching pipeline for the Devils. Since this rumor surfaced yesterday, Carbonneau has since come out and said he hadn’t heard anything from NJ about coaching the Devils but do coaches ever say “Yeah, I’m the guy” before the organization says “Yeah, he’s the guy?”. Craig Ramsey, whose name had been mentioned for the position was hired by the Florida Panthers yesterday, so he is off the list. Would Carbonneau  be a good fit in NJ. I’ll be honest, I certainly don’t want to type that name over and over so if he’s hired, I think we would need a good nickname for him.

The fact is he did a decent job while he was in Montreal.  Sure, he eventually got fired but all coaches get fired. Let’s remember that Montreal is a CRAZY hockey town, although Vancouver and their rioting after losing the cup knocks Montreal down to #2 on the craziest hockey cities in Canada at the moment and NJ is FAR LESS crazy so he could probably handle it here. I do question Guy’s (maybe I’ll just refer to him by first name) ability to control his players. During his time in Montreal, guys like Carey Price, Chris Higgins and Mike Komisarek certainly had their off ice issues but does NJ have anyone like that?. Can Guy bring out the best in a player like Kovalchuk because Kovalchuk certainly has a lot to prove to people? Alex Kovalev isn’t anything like Kovalchuk but he is a talented winger who was supposed to really help Montreal win a cup but never lived up to his potential while in Montreal. Like any coach, there are upsides to Guy Carbonneau, like his ability to run a PP and there are downsides to Guy Carbonneau. Hiring Guy Carbonneau wouldn’t be the worse move in the world, at least in my opinion it wouldn’t be.  Names like Therrien, Hitchock and Eaves are still being thrown around as well but right now, it appears that Carbonneau is the horse in the lead. What are your thoughts on Guy?

I don’t usually comment on the signings of other teams but I have to admit that I am a little surprised the St. Louis Blues not only signed Jason Arnott but Jamie Langenbrunner as well. Did they not pay attention to what the Devils accomplished last season? Truthfully, I was kind of hoping Arnott would come back to NJ and it’s the Langenbrunner signing that has me puzzled. For a guy who was named as the captain of the USA Olympic Hockey Team just less than 2 years ago, his game and attitude, I think have fallen really far. His interviews last season, while the team was tanking really bothered me but I suppose there is a place for everyone in this league and it is only a 1 year deal. The only puzzling part about Jason Arnott signing in St.Louis is that last season he only wanted to be traded from NJ to a contender and St.Louis only finished ahead of NJ by 6 points and missed the playoffs by 10 points and doesn’t really show any signs of being a team that will be drastically different next season. Why would he want to go there? If you were St. Louis, would you have signed them both?