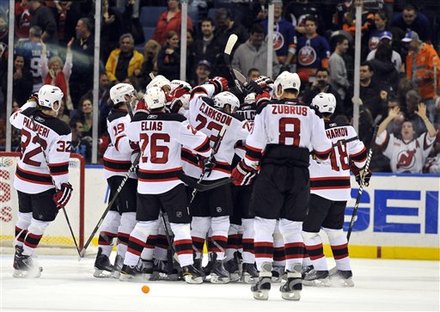 It's been all smiles for NJ lately and rightfully so...If the Devils can continue their winning ways tomorrow night when they Ottawa Senators come to town, this Devils team will reach the .500 mark. The way this team played and looked in the months of October, November and December, being a .500 team is a significant accomplishment. I don't think at any one point in time during those early months did I think that this team could put together such an impressive run, like they have in the last 24 games.

However, despite going 20-2-2 in the last 24 games, that has only gotten NJ to within 8 points of the final playoff spot. With 17 games left to play this season, it is going to be really difficult to climb into that spot. It's not that I don't believe in this team, it just that I agree with Jaques Lemaire when he says these 17 games are going to go by quickly and we do need for other teams to start losing. If the Devils were to pull off an amazing run and win the final 17 games of the season, they'd end up with 98 points, which would more than likely put them in the playoffs. But how realistic is that, to finish a season on a 37-2-2 run? Especially when NJ has 9 games against current playoff teams and 3 games against teams battling for that final playoff spot? One of these tough 12 games comes against the Rangers at MSG in the final weekend of the season, a game which could have HUGE ramifications on the playoff picture. I'll be sure to be watching that game!!

I'd be thrilled if the Devils climbed into the playoffs, not because I believe that if they do they could win the whole thing. Getting to the playoffs buys you a chance but I'd be more thrilled because this team would have overcome such a huge hole to accomplish something nobody thought was possible. Right now, I am just thrilled watching this team. I wasn't able to watch the Islander game yesterday (the reason for no recap..) but the Penguins game on Friday night was thrilling and thats all I can ask for, from a team that 24 games ago was 27 points out of the playoffs.

The point I wanted to make on this non-game day is that I feel pretty damn proud of this team and think that it is pretty impressive that the Devils are one win from being a .500 team when only a few months ago, they couldn't do anything right. I think a lot of people have erased that image of the puck getting away from Kovalchuk during a shootout where the entire arena bursted into boobirds, and rightfully so, he has completely turned his game around!!