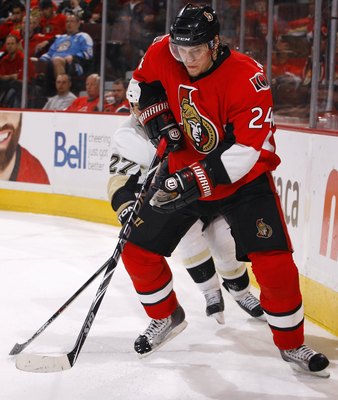 Last week I did a quick preview on the Devils Offense and what I thought each offensive player would bring to the table for the Devils this season. Today we will focus in the defense.


The Devils summer can pretty much be summed up by speaking one persons name, Ilya Kovalchuk but things did happen defensively for this team as well. Paul Martin departed for Pittsburgh, signing a five-year contract on July 1st because he felt the Penguins were in a better position to win a cup.  The Devils countered that situation by bringing in Anton Volchenkov and Henrik Tallinder to help sure up the defense.  Volchenkov is a similar player to Devils legend Scott Stevens, and Tallinder plays a solid defenseman who is especially good at helping young D-men find their place in the NHL.  In my opinion, both are an upgrade from Paul Martin, who certainly showed some shortcomings against the Flyers last spring. The transition game was non-existent for the Devils in their disappointing playoff performance last season and is something the Devils hope to correct with help from their two major acquisitions.


Andy Greene - Had a breakout season last year and will be tapped on the shoulder to repeat that performance this season. This is a contract year for Greene so I would expect he would want to bring it. Even if the Devils end up with cap issues, he'll want to show the rest of the league what he is capable of. Look for him to be paired with Tallinder to start.


Colin White - Thought was that he might find his way to Albany but that isn't going to happen. Lets be honest, the brutal type, Colin White isn't the same player he was. A few years ago, he suffered an eye injury and his ability to fight seem to go because of it. I don't expect much from Colin White and wouldn't be surprised to find him as the 7th defenseman at some point in the season.


Alex Urbom -  Urbom, just 19, was heralded as the teams' best prospect by GM Lou Lamoriello during the off-season, coming off an excellent first year at the junior level.  How he responds and adjusts/reacts to the NHL level will dictate how NHL ready he is and if he stays with the Devils or goes down to the AHL for some seasoning.  Either way, the future looks very bright for Urbom, a third round pick by the Devils in the 2009 draft.


As for the Goaltenders, well not much has changed for NJ. Marty will play and carry most the load and probably dictate how much he plays this season. One change from the recent past is the acquisition of a veteran backup, in Johan Hedberg, the type of backup the team hasn't had since the days of John Vanbeisbrouck and Chris Terreri in the early 2000’s. The team should have more confidence in Hedberg and be able to have Marty sit in the neighborhood of 20-25 games.